To share your memory on the wall of Robert RUDY, sign in using one of the following options:

It is with great sadness that Bob and Joan Rudy announce the passing of their eldest son, Jarrett, on April 4, 2020. Born November 14, 1970, Jarrett died in the loving arms of his wife, Cynthia Kelly, whom h... Read More
Professor Robert Jarrett Rudy

It is with great sadness that Bob and Joan Rudy announce the passing of their eldest son, Jarrett, on April 4, 2020. Born November 14, 1970, Jarrett died in the loving arms of his wife, Cynthia Kelly, whom he married August 23, 2008.

Jarrett worked at McGill University as a professor and Undergraduate Program Director in the Department of History and Classical Studies. In the early 2000s, he was Director of the Quebec Studies Program in the university’s Faculty of Arts.

After earning his PhD in History in the 1990s, Jarrett made his home in Montreal, going on to become a leading member of the Montreal History Group and principal investigator of its recent research grants. Jarrett was committed to fairness, equality, and the importance of community. He was respected and devotedly loved by friends, colleagues, students and fellow Historians, the world over. Throughout his life, he continued to cherish his roots in Tavistock and actively promoted the preservation of its local history.
While complications from his recent heart surgery cut Jarrett's life short, this tragedy will never erase the love and joy that he gave.

Condolences can be sent to his wife Cynthia Kelly mots@bell.net or Bob and Joan Rudy robertrudy@rogers.com

Due to the Covid 19 pandemic, a memorial service will be held at a later date. In lieu of flowers, donations can be sent to the Tavistock and District Historical Society, P.O. Box 280, Tavistock, ON N0B 2R0 or to www.tavistockhistory.ca
Read Less

Receive notifications about information and event scheduling for Robert

Donations are being accepted for: TAVISTOCK AND DISTRICT HISTORICAL SOCIETY.

We encourage you to share your most beloved memories of Robert here, so that the family and other loved ones can always see it. You can upload cherished photographs, or share your favorite stories, and can even comment on those shared by others.

Plant a Tree in Memory of Robert
Plant a tree 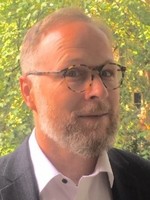