To share your memory on the wall of Duncan GETTY, sign in using one of the following options:

Print
Duncan Renwick Getty decided it was time to go on Friday December 11, 2020 at the age of 95 and he did just that.

Born in 1925 in Galt (Cambridge) Ontario as the only child to Thomas Gunning Getty and Ellen Susan (Renwick), Duncan starte... Read More
Duncan Renwick Getty decided it was time to go on Friday December 11, 2020 at the age of 95 and he did just that.

Born in 1925 in Galt (Cambridge) Ontario as the only child to Thomas Gunning Getty and Ellen Susan (Renwick), Duncan started life with purpose and never faltered. He was going to live a life of service, civility and humour and he accomplished them all.

Duncan married the woman who recognized his infectious spirit and giving heart, Jeanne Anne Banting, who would provide Duncan uncon-ditional love even though he put ketchup on everything he ate. They joined together at the Peacehaven Scout Camp chapel near Drumbo, a chapel that Duncan had helped build during his Galt scouting years and they created a life together for the next 69 years.

That is not the only thing they created! With six children, twelve grandchildren and eleven great grandchildren, they also created a legacy and tribute of their life and love. Either that or they wanted a family hockey team.

Duncan was a man who served his country in the RCAF, served in every community he lived in and loved his family through his actions. He was a man of short stature yet could stand so large in a crowd. Duncan listened intently but when he had something to say, he made sure he was heard. He could give the look!

In 1974, Duncan retired from the military life and moved his family to his beloved Peacehaven Scout Camp where he became the custodian for the next decade. It didn’t take long before he was accepted as one of the locals in Drumbo. Duncan had a way of just moseying himself into community and people’s lives to make lasting connections.

The town of Princeton was introduced to Duncan and Jeanne in 1983 but again it did not take long before everyone knew Duncan. Through his service, generosity and quick wit, he quickly became the “Go to guy” for any community events and as the town historian. The children labelled Dunc the “unofficial mayor” and dog owners learned quickly to take a good hold of the leash when they saw Duncan coming. His left pocket was full of Werthers for the kids and his right pocket was full of Milk Bones for the dogs. Jeanne became very resilient about checking his pocket before doing laundry and sometimes she even got paid for her efforts in loose change.

But who was Duncan Getty? Duncan was a man who did not talk about how to live, he just did it. He asked very little for himself but would give unconditionally. He truly saw people and accepted them without judgement. He enjoyed shelled peanuts which irked Jeanne since she was the one that had to clean up his mess. Are you getting the idea of how much he was loved? Dunc never moved faster than he had to because he didn’t want to miss the opportunity to recognize everyone and stop to chat. He showed his children how to live instead of tell-ing them how to and “gosh darn” they all turned out okay.

Duncan, Dad, Pops, Grandpa, cousin, neighbor, friend, by any of the names he was known, what a great guy Duncan was. I smile as I write this because he fulfilled his purpose. He made a positive difference.
Duncan’s family would like to thank all the staff at Woodingford Lodge in Woodstock for their kindness, respect and compassion you shared with us through Pop’s final journey.

Due to Covid restrictions which Duncan refused to become a statistic of because he wanted it his way, Duncan will not have the community send off he desired for his funeral. A celebration of his life will be planned once restrictions are lifted and together we will all be able to breathe safely again.

To honour Duncan, donations to the Princeton Friends of the Park or the Princeton Museum/Library Roof Fund would be greatly appreciated.

Arrangements entrusted to the Glendinning Funeral Home, Plattsville and personal condolences can be posted at www.gffh.ca
Read Less

Receive notifications about information and event scheduling for Duncan

Donations are being accepted for:
PRINCETON AND DISTRICT MUSEUM LIBRARY ASSOCIATION Princeton Friends of the Park

We encourage you to share your most beloved memories of Duncan here, so that the family and other loved ones can always see it. You can upload cherished photographs, or share your favorite stories, and can even comment on those shared by others.

Posted Dec 15, 2020 at 11:11am
I had the pleasure of getting to know Duncan and Jeanne when they lived at Telfer Place. I did cleaning and laundry for them and became friends with them. How could you not. Jeanne and I were very chatty and Duncan always listened. But when he had something to say, he had something to say. I too had to check his pockets because often there was money in them. I use to joke with him that he didn’t need to tip me. Duncan, like myself grew up in Galt. We were always talking about people and places that we remembered. Duncan had the best t-shirts. My favourite read “ Getting old isn’t for sissies” His children were forever finding t-shirts that captured Duncan’s humour and approach to life. I’m pretty sure there was one about Ketchup. I also had the pleasure of meeting some of his children and knowing what a wonderful influence their dad was in their lives. Although I hadn’t seen Duncan for sometime now, I’ve thought about him often. Particularly this past November 11th and remembering all those that served. May he Rest In Peace. Love Christine Howes
Comment Share
Share via:
LS

I got to meet the great Duncan Getty through his daughter, Nancy, in the mid-70's while playing for the Ayr Rockettes women's hockey team. Nancy was our goalie, and a darn good one too! I had the pleasure of chatting it up with Duncan sometimes after our games, describing Nancy's heroic acrobatics on the ice and how she had pulled out another win for us. He listened more than he spoke and it was fun to make him giggle. Nancy adored her dad and he admired her spunk. His support for her hockey talent was glaringly obvious, not so much through his words, but more through his actions and encouragement and endless sense of humour. He was a great dad. I lost touch with Duncan and Jeanne and Nancy after moving to northern Ontario but memories like that and positive, influential people like Dunc never fade away. RIP Little Big Man.
NG

Christine, you took such good care of my parents needs going beyond what was expected. They both looked forward to your knock on the door. Always great conversation. Thank you for your kind words.
NG

Lorie, wow! You captured him so well. His chuckle was infectious for sure. Thank you so much for sharing the memories
3 Comments | Show All 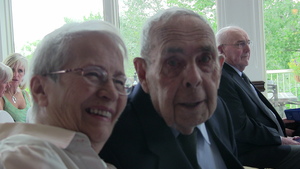 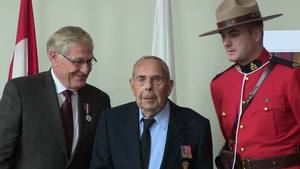